These are the special ones I made for my husband and son
First my husbands.....
Now there is a bit of a story behind this one, so bear with me.
When Ben was little of course Father Christmas would visit him and put all his presents in a sack under the tree (the sack I had as a child in fact) and the Tooth Fairy would magically swap his baby teeth for money when they fell out...............well that was until the day she forgot!
One late night near to Christmas when Ben should have been fast asleep she realised her mistake and quietly asked her husband (yep the Tooth Fairy is married & actually looks just like me) what should she do whilst standing outside Ben's room; sneak in in the pitch dark and risk waking him up, or try and swap it first thing in the morning and run the risk of him waking first and seeing the tooth was still there?
Then I, errr I mean the Tooth Fairy heard a little voice...
"Mummy if you are the Tooth Fairy that means Father Christmas is not real too"
I was crushed and knew my cover was blown
my sweet little son was just 6½ years old
(and too smart for his own good)
We could not lie to him, so from then on we had to make him promise not to let on to all the other little boys and girls who still believed in Father Christmas......it was adorable, he'd wink at you when he was pretending and thought he was such a big boy because he knew the secret! 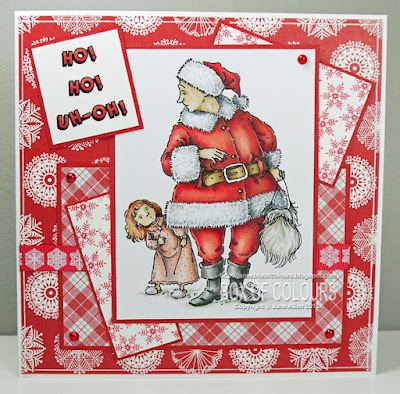 as for that little boy
who is now 17 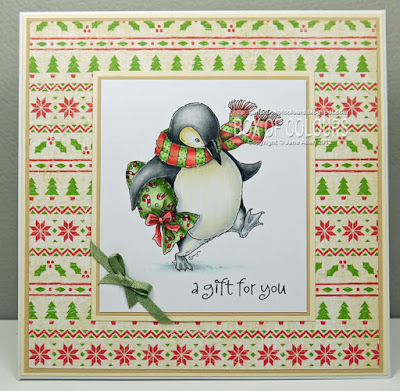 We live quite near to Whipsnade Zoo and when Ben was little I would take him to visit quite often.  It was a running joke that Ben would refuse to go near the penguin encloser because they smell.

This little boy would get a whiff of fishy/penguin pong and announce
"eugh, stinky penguins!"
and head off in the opposite direction....at speed!

but snakes, bugs and anything that made Mummy's skin crawl were wonderful!

Ha ha the joys of being a parent!!

Posted by Jane at 08:00
Email ThisBlogThis!Share to TwitterShare to FacebookShare to Pinterest
Labels: Copics, Mo Manning

They are both beautifully coloured Jane - gorgeous!!!

A very happy Christmas to you honey!!

Oh.My.Word! There is just no stopping you - both stunning, both awesome, both perfect!! Have a very Merry Christmas and a Happy New Year my ultra talented friend. Hugs, Sxx

Two gorgeous cards Jane. Your story made me laugh!
Tom(aged 7) came home from school and very seriously asked....If Father Christmas is real, why are there children in Africa who haven't got any food or a house??!!!!
I ermm...I...You'll have to ask your Dad!!
Have a lovely Christmas
Lorraine x

Thanks for sharing these lovely cards Jane, and the stories behind them. Have a wonderful Christmas.
Joyce xx

Have a most wonderful Christmas and New Year with your family Jane! Your cards "dazzle" my mind and eyes and I just love them.
Hugz,
Gramma

Two wonderful cards Jane, i adore the first one, the image is too sweet!

Hi Jane, I love both cards the designer paper on both is beautiful. And of course so is your coloring. Wonderful cards. joann sassy raggedy
Merry Christmas

both so stunning jane.i love the images and your colouring just brings thme to life.
wishing you a really Happy Christmas :D

Both Cards are wonderful but it't the Penguin that does it for me.
What a fantastic image coloured to perfections.
Hope you and your boys have a wonderful Christmas.
xxRosxx

Two beautifully coloured images. I especially love the penguin who doesn't smell at all! And two lovely stories to accompany the cards! I wish you and your family a very merry Christmas Jane! Festive hugs, Lesley

Two beautiful Jane style cards and love the stories.
I would like to wish you a Happy and Healthy Christmas and New Year.
Big Hugs to you my friend.
Tracy
xxxxx

Love the sweet stories behind your cards Jane. Sounds like Ben is a pretty wonderful guy with great parents. ☺ Have a merry Christmas!

I love your terrific coloring and creative ideas. Thanks for sharing your stories! I so look forward to reading them! Happy Holidays!

Hi Jane I have only just found your blog and had a quick look around wow what a gorgeous collection of cards they are all stunning I must say I really love the grey santa posted on 3rd Dec he is gorgeous now following
Jacki xx
http://scullduggery-cardsbyjacki.blogspot.co.uk/

Adorable cards and equally cute stories to go with them. Hope you had a great Christmas. Happy new year!!!