Hello there, did you manage to get all your Christmas cards made?

I had a brainwave last year when I realised that it was going to be impossible for me to make individual cards for everyone.  So I hit on the idea of drawing and colouring my own design, which I could then replicate.  OK, that meant stretching myself to do my first ever fine art piece of Copic work, but I did it and saved myself from, heaven forbid......buying cards!

This year, I just had to decide on the subject matter and it was whilst I was pondering that my Westie, Pip went tearing down the garden chasing after our local squirrel.........lightbulb moment!

Last year I didn't dare take photo's as I worked for fear of goofing, but this year I managed to tear myself away long enough to take a couple: 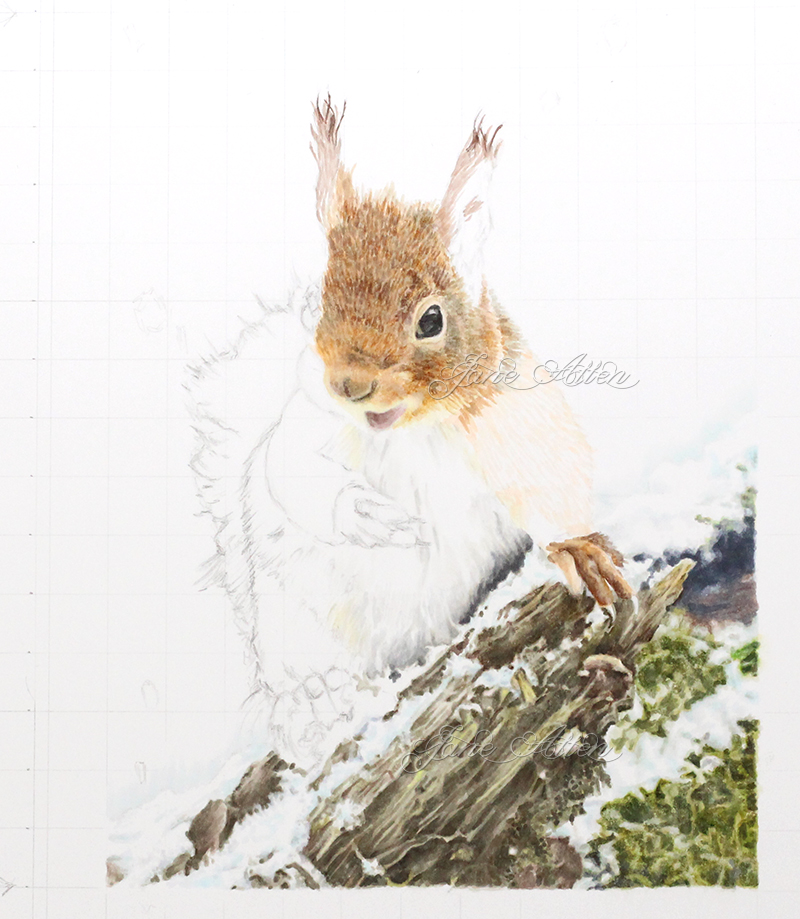 Having sketched out the squirrel, I started with the greenery in the background before turning my attention to that rather fiddly log the squirrel is perching on.  Oh, not to mention snow, which as I discovered last year is not white.  The knack is to colour the shadows, to give the impression of depth, rather than leaving areas of blank white space. 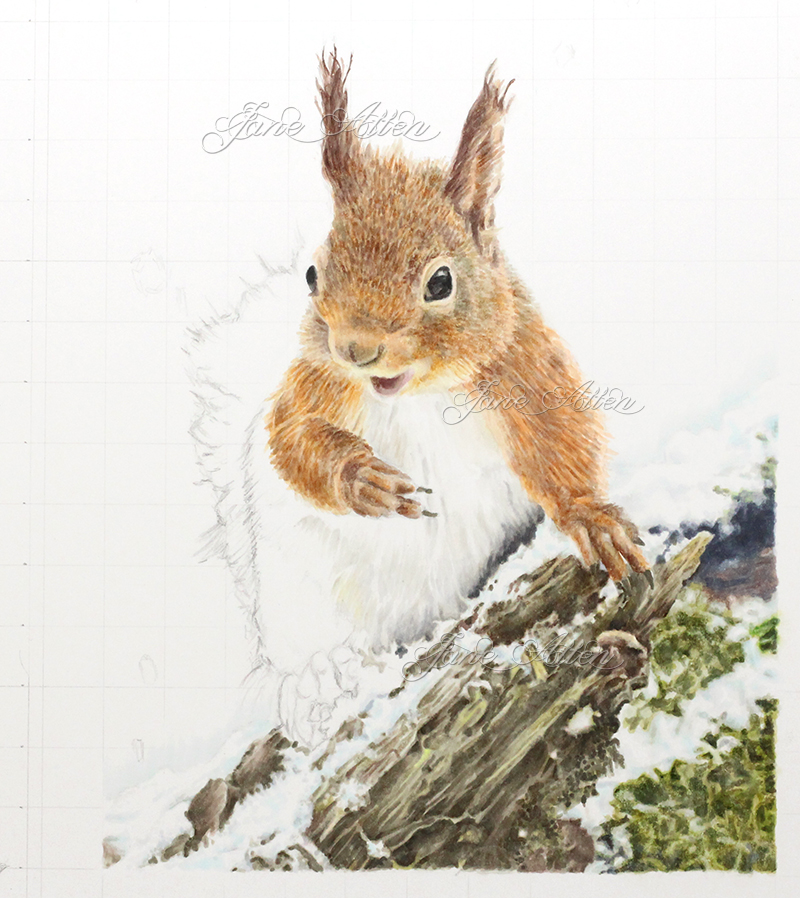 His fur was a challenge too, its made up of so many shades of red and grey, but as I built up the layers  the little guy started to take shape.  He looked so much better when I gave him two eyes, I almost felt him watching me as I continued, steadily to add his fur.

And, now for the final photograph - for my Christmas card prints, I used a scanned image as I did last year.  But in honesty my new Canon camera did a fab job, so next year I may skip the scan.  Anyway, enough waffle, I'm sure some of you have already moved on to the final picture............... 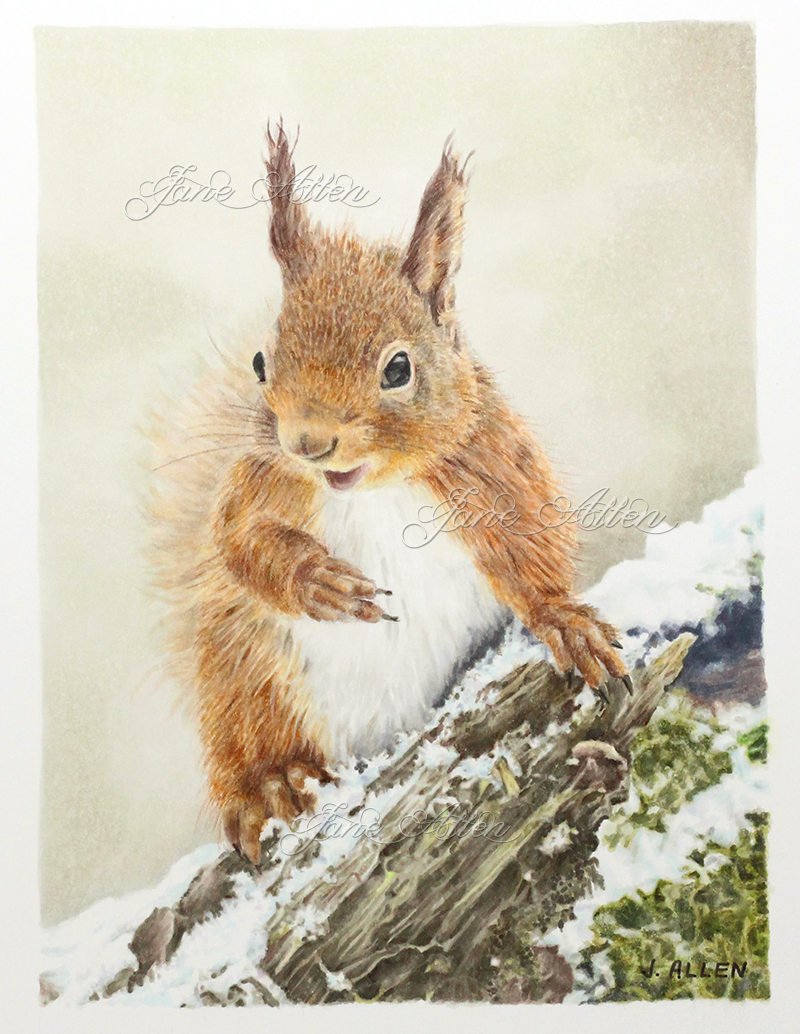 His bushy tail was wispy and I hope I've managed to capture that.  I opted for a simple background, lets face it, it's the squirrel that should have centre stage after all.

I have actually entered this little chap into the Copicaward.com competition, but he is up against some awesome competition.............whatever the outcome, I am chuffed to bits with my tufty little boy!

Wow this is so wonderful. Merry christmas for you and your family. Hugs Marja

Amazing! I am envious of the recipients lol. Hope you have a wonderful Christmas.

OMG!!! This is a jaw-droppingly perfect drawing!!! Your colouring is beyond compare!!! I'm amazed again!!! Merry Christmas!!!

wow you are so incredibly talented!!!

OMG Jane. I'm going to hang up my paintbrush and Copics and give up. This is AMAZING. I know I've said it before, but I wish I could just sit and watch you colour sometimes. This is gorgeous. Truly gorgeous.

Wow! That is stunning! Can't believe that is all done with copics!!

I've just come back to see this guy again, and it simply does not look like Copics (or what my pal calls 'felt tip pens'). It's absolutely amazing and I'm so in awe of your Copic skills. I've just been over to the Copic page you mentioned to see what you consider to be 'tough competition' to your Squirrel, and there's no contest Jane. Yours really is fine art, not flat cartoon colouring which seems to be the majority of the content there. Yours should win without question. The only way it won't win is because they don't believe it's done with Copics either! Fingers crossed for you sweetie. xxx

This is really an excellent blog as well as its content.
http://dartsbeasts.com/best-soft-tip-hard-tip-darts-on-market/